With the entire Texas National Guard now activated in the state of Texas, President Trump has declared states of emergency in both Texas, and Louisiana as Tropical Storm Harvey continues to dump historic amounts of rain on the area.
With it being the first natural disaster he has dealt with as President, Donald Trump will no doubt be in line for criticism for how he handles the situation.
So far Mr. Trump has tweeted updates when he is briefed and applauded the efforts made by local officials to keep the people of Texas safe. 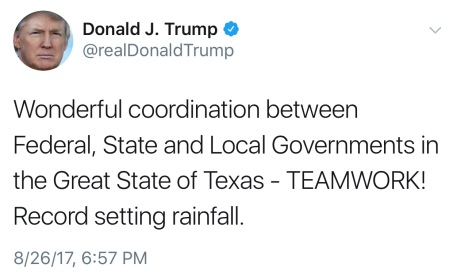 President Donald Trump and First Lady Melania Trump will visit Texas on Tuesday to get a first hand look at the damage and the efforts being made to assist those in need.
If you’re interested in donating to the Tropical Storm Harvey relief efforts visit
www.redcross.org